[UPDATED Oct 2016] – I originally wrote this article in 2012 and it was long due for a major update. Lots has changed since the original. Make sure to check out the comparison chart below that covers Primavera P6 EPPM vs PPM.

Since version 8, Primavera P6 can be purchased in 2 flavours:  you can purchase licenses of Primavera P6 Professional Project Management (P6 PPM) or Primavera P6 Enterprise Project Portfolio Management (P6 EPPM).  These are separate products in the Oracle world but in truth they used to be one application under the Primavera P6 banner. What’s the difference? Let’s find out. 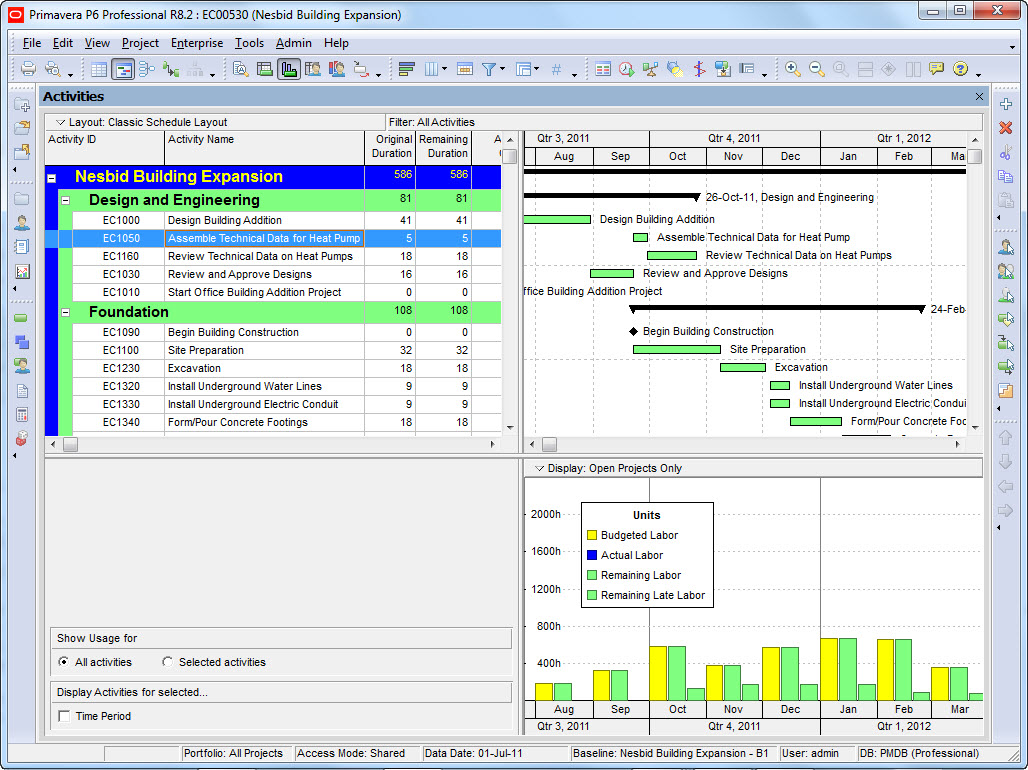 Architecturally, it consists of a the Project Management client that installs on a Windows PC and connects to either a server-based or a local database. Microsoft SQL or Oracle databases are supported, as is SQLite.

Primavera P6 Professional (PPM) is programmed with the CPM Scheduling (Critical Path Method) algorithm. At the most basic level it assigns dates to tasks based on sequencing and task duration. The output is a project schedule with dates applied and a Critical Path clearly identified, not to mention the calculation of a project end date.

One of the biggest selling points of Primavera P6 Pro is that the software can easily handle large project schedules of up to 100,000 activities.  (BTW: don’t ever build a schedule THAT big….it’s not good for your health).

Some would argue that Primavera P6 Pro is old technology, and they wouldn’t exactly be wrong. The codebase for the tool has been around for almost 2 decades (don’t quote me  – my best guess), and even the look and feel of P6 Pro reminds of Windows 3.11 days. But the fact of the matter is that P6 works, and works hard. And the use of the tool worldwide has positioned Primavera P6 Pro as the standard tool on major projects for both Owners and Contractors.

Is Primavera P6 Professional PPM a standalone tool or an enterprise tool?

What is Methodology Management in P6?

Is there are a 64-bit version of Primavera P6 Professional (PPM)?

Yes there is. The 64-bit version of Primavera P6 Professional was released with version 15.2. While almost all P6 versions have been able to run on a 64-bit operating system for some time, with the release of the 64-bit Primavera P6 client, you can now expect a more robust tool that can now access more native RAM and likely perform better.
I did want to warn you that there were some hiccups with the 64-bit version and some minor features were left out.

That’s what you might think, but Primavera P6 EPPM (more below) is still coming into its own and I would say it isn’t there yet. Even Oracle is working on it, many users have complained about Primavera P6 EPPM’s poor performance, when they’ve been used to the relative speediness of Primavera P6 Professional. A slow tool isn’t acceptable either even its web-based. EPPM’s java core has proved to be a major headache as well, with constant popup reminders to upgrade and grant permissions. P6 EPPM has some really nice features that P6 Professional doesn’t, but it’s still been a real tough sell for legacy P6 users.

The other factor is that Primavera P6 Professional is relatively easy to install and manage with no costly addons. Primavera P6 EPPM is built on-top of web applications, and the architecture gets complex fast, not to mention the many optional addons like BI reporting, and P6 Analytics that essentially add some features that Primavera P6 Pro already has natively.

Read on for more. 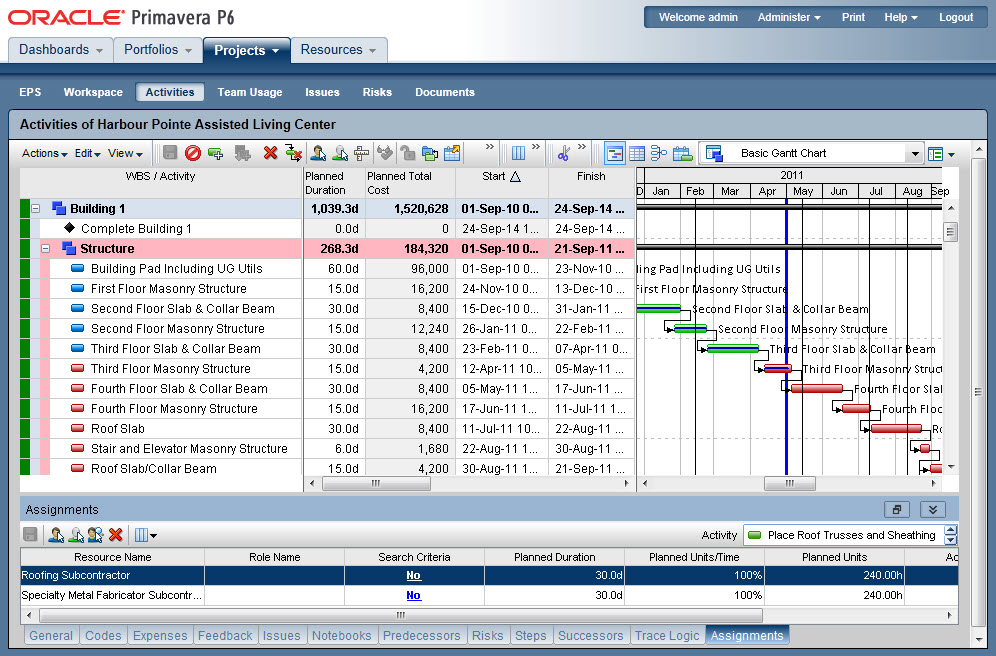 Primavera P6 Enterprise Project Portfolio Management is an enterprise portfolio and project management tool. Primavera P6 EPPM is 100% web-based, so it runs in a browser and connects to a webserver that serves-up a visually-rich interface. P6 EPPM also connects to a main database where all of your project information is stored.

The advantages of a web-based project management tool are many. It’s easy to onboard users – just provide a login, no installation on your local PC necessary. And of course, web means mobile, so you can access and update your P6 project data on mobile apps with EPPM.

Primavera P6 EPPM brings a whole new set of features and functionality that sets it apart from mainstay Primavera P6 Professional.  For example, the web side of EPPM is very rich in graphs, charts, pivot tables and dashboards. It’s a new way of seeing P6 project data in a rich graphical sense. Many graphs and charts have drill-down capability so you can dive deep into your data.

Primavera P6 EPPM has a big focus on Portfolio Management, which allows you to manage groups of projects together in a portfolio, and to manage that data, be it cost, schedule or resource-focused.  The Portfolio Management features are good, even incorporating a project selection feature where you can score next year’s projects and decide which ones deserve a green light. Evolved risk management functions were added to EPPM as well, but I admit they are not intuitive at all.

My personal opinion is that Primavera P6 EPPM is a very advanced and sophisticated web-base pm tool.

But it’s not without it’s foibles.

Java is constantly popping up with security warnings, it takes forever to load many screens and it’s slow.

Primavera P6 EPPM users’ main complaint is that the tool is slow. It takes many screens a long time to load. Many screens have to reload to get the right data to show and it’s slow. It can be slow to login, and to logout. And who likes to wait for slow websites?

The other main beef users have is that some of the features of Primavera P6 Pro don’t exist in P6 EPPM. Features like daily data (recently added to EPPM), bucket planning, the WBS screen, text reports and more. This list is getting shorter all the time, but it has taken long enough for many users to make up their minds about the inadequacies of Primavera P6 EPPM.

Who is EPPM for?

Primavera P6 EPPM is truly geared for a medium to large sized organization. It’s enhanced features make it an excellent tool for companies managing a few too many projects. Since it requires a lot of infrastructure, it’s not ideal for smaller companies even though they might like the mobile access.

It’s like this. Primavera P6 EPPM ships with an altered version of Primavera P6 PPM called Primavera P6 Professional for EPPM. Some of the PPM features are scaled back, mostly on the administrative side to allow the 2 tools to connect to the same database. For example, all admin functions need to be done in the Web-tool – adding users, creating EPS, managing global activity codes – all of it happens in the web now.

So yes, you can get the benefit of both tools if you’ve bought Primavera P6 EPPM.

Are there Mobile Apps that work with EPPM?

Yes. Primavera P6 EPPM has both an Android and a iOS app (called Oracle Primavera P6 EPPM). These apps can be used to both view and update project activities that you have been assigned. The app has a Timesheet submittal feature as well. I haven’t found any reviews yet. If you’re interested, the app has a built-in demo so you can try it out without an EPPM install kicking around.

Here a handy chart that will help you understand the differences that we’ve discussed up to here in this article. What Primavera P6 software should you buy?

From a scheduling perspective, Primavera P6 PPM and EPPM do the same thing. They schedule projects in exactly the same manner.

From a cost perspective, they are actually priced somewhat similarly.

But from a functionality perspective, if you have one or two projects to schedule and work for a small to mid size company, Primavera P6 Professional is for you.  It will allow you to send your schedules to companies you work with.  It is straightforward to use and has a world-class scheduling engine.

If you are in the market to purchase an Enterprise project management tool or you and your team are currently managing 30 or more projects, P6 EPPM is definitely a solution to explore.

If Oracle fixes EPPM’s performance issues, would you make the switch? How important is using a web-based project management tool to you and your organization?