Why am I saying this is the 2nd iteration? In 2015, Oracle committed to delivering 2 releases per year x.1 and x.2. At that time they shifted their version from version 8.x to version 15.x, seemingly jumping 7 versions in numbers. The reason was to match the release version to the year – so version 15.x was released in 2015, 16.x in 2016, etc. Now, they have shifted their versioning scheme again so that the sub-version matches the month. Thus 17.3 was released in March (3rd month) and 17.7 was released in July of 2017.

Before I tell you about what’s new, did you know that the Oracle Primavera business unit was renamed Oracle Construction & Engineering? That change in fact was announced in 2016, but it’s only this year that the branding seems to be noticeable on their website. It definitely reflects the stance that the business unit is committed to the industries they support and that they are willing to change with the times, at their own pace mind you.

And now, what you’ve been waiting for.

Oracle continues to migrate Primavera P6 EPPM from it’s Java-based platform to HTML5. Java has proved to hinder the product going forward and it’s been at least 2 years since the team announced P6 EPPM was moving to HTML5. It seems progress continues on a page-by-page basis, with some redesign of the pages (or screens if you prefer) as they go along.

Specifically, the following pages are the latest to move to HTML5:

I’m please to see Print Preview on this list, as it has been notoriously diffult to get any sort of good-looking print content out of P6 EPPM, including PDF. I’m hoping that has now been fixed.

A new feature now allows admins to limit users to only HTML pages by disabling applets. This can be useful for preventing users from encountering Java-related issues. An applet setting in Application Settings affects all users. A setting for User Interface Views allows you to assign different access to different users. 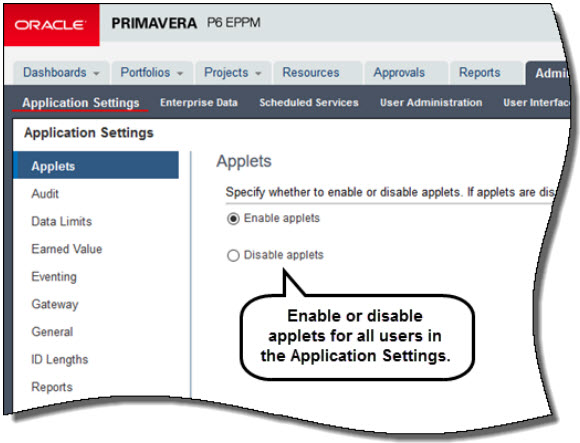 What else is new?

There are a few other page enhancements including:

The addition of these 3 are really good. P6 EPPM has never quite had the exact same behaviours as Primavera P6 Professional and the addition of the WBS/EPS handling and rollups are additions you’re going to like.

P6 mobile also got a smattering of new features. I’ll let you read about them here.

I’ve noticed on Oracle’s support site, Primavera P6 Professional already has a release 17.8 with a few more bugs fixed. So I’ll say that P6 Pro is really on r17.8 now.

You’ll find this list rather light. I’m pretty sure some bugs have been squashed, including a major bug affecting Import and Export Capabilities to an Excel Spreadsheet. Users had reported this issue with r16.1. When trying to export data to an XLSX file, they were met with a message contact their administrator. That issue is fixed in Primavera P6 Professional r17.7.

There are a few enhancements in r17.7 for Primavera P6 Professional users who are connecting either to the Primavera Cloud or to a Primavera P6 EPPM database. I’ll let you read about them here.

But for those who are strictly Primavera P6 Professional users, you will find no new features or enhancements in release 17.8. Bummer for us.

Got a thought or issue related to the new Primavera P6 versions? Tell us about it in the comments below.